Banner has graduated over 500 students since opening its doors in 1982. Our graduates are our greatest ambassadors, for their personal and academic achievements in high school and beyond embody the values and learning excellence that are at the core of the mission of the School. The foundation that is provided in a nurturing but challenging environment at Banner empowers students today to lead tomorrow. Graduating from such institutions as West Point, Bates, Cornell, the Naval Academy, Wake Forest, Berklee College of Music, and the University of Virginia, alumni are following their passions to become architects, Navy pilots, veterinarians, ministers, maritime captain, police officers, social workers, linguists, teachers, musicians, lawyers, and doctors. Look to the sky; look to the sea; and look to the land and there you may see a graduate of The Banner School. 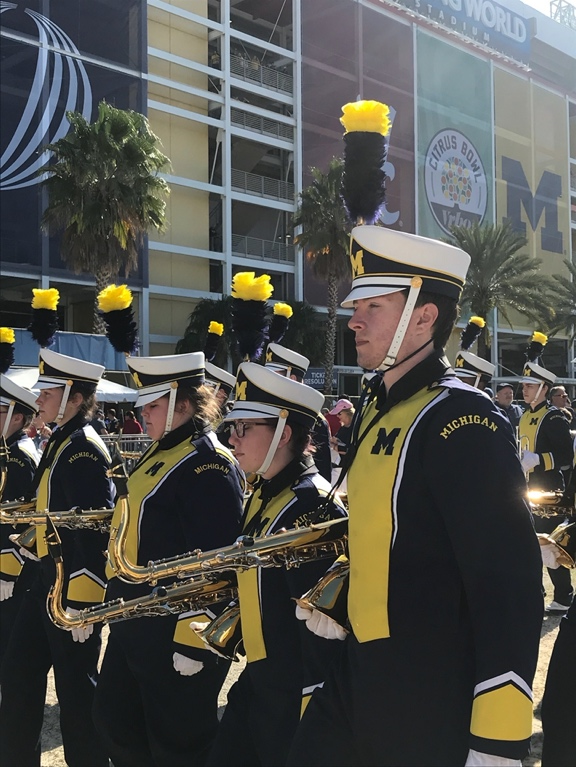 Amos graduated from the University of Michigan with highest honors in May 2020 with a major in Chemistry and minors in Music and Biophysics. A member of the academic honor society, Phi Beta Kappa, Amos also participated in a chemistry study abroad program in China at the Shanghai Jiao Tong University; played in the marching band and basketball band. Amos was accepted to the University of California, Berkeley to pursue a Ph.D. in Chemical Biology this fall. Amos attended The Banner School from kindergarten through 8th grade before attending and graduating from Urbana High School's International Baccalaureate program. He has served as a member of not only Banner's NJHS but Urbana's NHS, and received the Chemistry Award for outstanding academic achievement in Chemistry. Amos played the tenor saxophone in the Urbana Marching Band, concert band, jazz band, and pit orchestras for the annual musical. The Banner School experience allowed for practical leadership opportunities with participation in group projects, school programs, assemblies and as mentors to younger students. Banner's teachers helped students become communicators of ideas and instill a lifelong love of learning. Amos made lifelong friends at Banner and enjoyed being part of a school community where he felt the support of teachers, peers and parents. He thrived in a small intimate learning environment, where he and his peers felt safe to interact with each other, with teachers and other adults, to ask questions, to try new things and be creative.

Scott Nisenfeld, Class of 1992, attended Banner from 1st through 8th grade; he completed his BS in Computer Science from Carleton College and an MS from Brown University. Scott is employed as a software engineer for a worldwide internet game company.

Frederick Christian Wright V, Class of 2014, “At Wofford [College], I have excelled in the classroom and outside the classroom. I currently serve as the Secretary for the College’s Honor Council, and this is a committee that consists college students and professors who enforce and uphold the college honor code. I also serve as the Parliamentarian for the student body government. I have now mastered the language of Roberts Rules of Order.  I also serve as the Vice President of the Interfraternity Council (IFC). My role as Vice President is to oversee the fraternity recruitment process and run the program. With that, I am also the Secretary for my Greek organization, Kappa Sigma. Returning now to academics, I am currently a government major with a concentration in Political theory(Government philosophy). I am also minoring in international affairs and potentially economics. I am on the pre-law track as a member of the Hardin Law Society and plan on taking the LSAT exam this fall. I have already started the law school search which will start the next phase in my life in the not too distant future.

I am confident that my success at Episcopal [High School] and Wofford [College] comes from the hard work and skill set that Banner provided me. I reflect on my experiences from Banner quite often. The friendships that I made with both teachers and students at Banner are still keen to this day. I always talk and hang out with my friends from Banner, and our friendships continue to become more durable and robust. The same goes for the teachers and faculty that positively impacted my Banner Experience. I have been through a lot of different schools in my life. The skills that Banner provided me have made me a better man to this day. There are not enough words in the English language that can summarize how grateful I am to have attended Banner.

Mackensie Smith, Class of 2010 – “One thing that sticks out for me in how Banner prepared me for high school and beyond was that encouragment to particpate in everything I do. That has really made it for me in high school and has helped me win the respect of all of my high school teachers. Also, participation is key.”

Shane Better, Class of 2016 – graduated from Our Lady of Good Counsel Catholic High School in Spring of 2020 and will attending the University of Pennsylvania in the fall with a full scholarship that covers all tuition, room and board.  He was also accepted to Duke; University of Virginia; Williams, the University of Maryland Honors College; William and Mary and Georgetown School of Foreign Service with full scholarships.  Shane was named one of the top three students in his class to graduate with high graduating honors, and is also a National Merit scholar.